As time has gone on, the inevitable has happened — I’ve settled into a routine. And honestly, I’ve burned out a little on writing as well. I started keeping this blog as a way to encourage me to keep seeking out interesting things to do. But it’s also had the unintended effect of making me stressed when I go too long without doing something that that feels “worth sharing.” I also feel that it’s become a curated, idealized version of what I’m doing here. Most days, I teach, climb, and maybe do something that might turn into a blog post.

So I’ve taken a little step back. Took a break from taking pictures and seeking out experiences for the sole purpose of a decent blog post. It started out that I’d just do stuff and a blog post would follow. But as I ran out of easy and obvious (but nonetheless interesting) stuff to do, it became a little harder to find stuff to write about. I’ve been on the hunt for weird experiences — and there’s definitely some coming — but the past few uneventful weeks have been stressing me out.

I’m in the midst of something that happens every so often — a week or two where I’m just unexcited. Every few months, I sometimes have a period of time where I’m in a general state of disinterest. It’s usually after a period of time where I haven’t been doing much that interests or excites me. Back in the US, my reset button was my bike. I’d head out late at night with a headlamp; usually around midnight or later. Riding for a few hours in the dark with the road to myself was always incredibly therapeutic.

So today I decided to hit the reset button. I packed my camera in the morning before class. As soon as I finished teaching, I got on my scooter and started driving south with no destination in mind. I wanted to get out of Kathmandu for a little bit. Luckily, Kathmandu is just a big small town. It took 15 minutes to hit the ring road, then another 15 and I was out of the city.

The traffic thinned out almost immediately. Before long, I was riding alone, flying down a wide (and paved!) road, dust billowing behind me. As the buildings became less densely-packed, I could see the valley sprawling out on either side in the gaps that whipped by. Eventually, I came to my first stop — the aptly named “Windy Hill.” 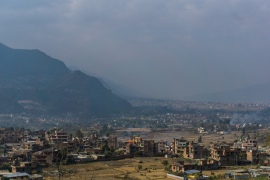 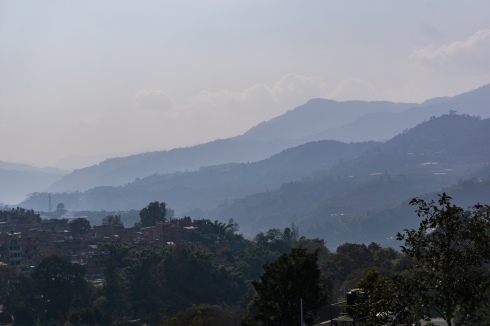 The view from Windy Hill stretched out for miles, blocked only by the mountains to the south and the haze from Kathmandu to the north. A few others were enjoying the view as well, but I was the only foreigner. Despite the close proximity to the city and the road directly behind us, it was quiet. All that could be heard was steady wind and soft chimes from the bells of the shrines on the hill. I stayed for a little while, but it didn’t hold my interest for long.

I got back on my scooter and headed further south. A friend had recommended a certain village to me, but I overshot it by several kilometers. As I am wont to do when I miss a turn here, I said “screw it” and kept driving.

The road narrowed quickly and its quality degraded the further I went. Eventually I left the pavement behind and hit dirt and rocks big enough to be an issue if I hit them too hard. Because Nepal becomes extremely dry during the winter, even the smallest gusts of wind made the road erupt in a storm of dust. When I caught up to a bus, I was wishing I had brought goggles. Pedestrians hugged the edges of the road as the bus went by, covering their mouths with the ends of their saris as they disappeared into the passing cloud of dust and black exhaust. I tried my best to get around the behemoth in front of me, but it took up literally the entire road.

When the road turned right, I decided to pull over and stop for a while. After the dust cleared, I could see I had parked at a dirt soccer field that was lined with homes. Soccer fields in places like this are always my favorites, so I got out my camera and set off down the different roads available to me. Some kids rode bikes around the field, trailing dust clouds of their own. A group of men sat in a circle at a mechanic across the field, occasionally turning to look at me and smiling when they saw that I noticed. Voices echoed from inside the primary school as I walked past. In a dug-out pit near the field, a pagoda rose up, supported by bamboo scaffolding. The slopes of the pit were ridged with decaying stone steps and shrines adorned with marigolds and red tika. A curious dog looked at me for a moment before going inside the pagoda and leaving with a piece of roti bread that was left as an offering at the shrine inside. 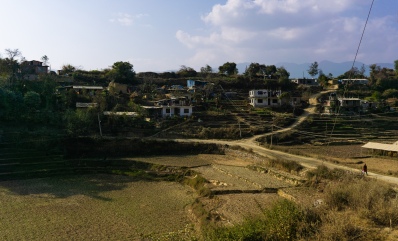 The road quality fell yet again once I began pushing further south. Bends in the road tilted at 45-degree angles made it feel more like a BMX course than anything a 100cc scooter has any business tackling. Still, I saw scooters parked at the houses I passed, so I decided my beat up little Dio could handle it. I wasn’t so sure about the tires (they’re my third replacements), but they proved me wrong.

The road wound its way through dried rice terraces and up along the narrow ridges of the Himalayan foothills. The change in altitude was made apparent by the sudden overwhelming scent of pine and a cool breeze rustling through the needles. The dirt of the road was nearly bright orange, reminding me more of the red dirt of Arizona than anything I expected to find in the Himalayas. Further taking me from Nepal was the sight of a lone cactus growing on the side of the road.

Am I the only one who thought they only grew in North America?

The road kept snaking upwards. I came to a point where I felt that I was running the risk of getting seriously lost, and I no longer trusted my faulty gas meter. There was a space on the side of the road at a sharp bend, so I pulled my scooter over. Across the road was a small dried-up field, elevated five or six feet above it. I scrambled up and immediately recognized the spot I was looking for.

The grass of the field crunched underfoot as I crossed towards the opposite ledge. When I got closer, I realized it was a straight drop to the fields hundreds of feet below. I sat down a foot or so back from it, tossed my backpack aside, and turned off my music. The only sounds that could be heard were the wind in the pines, birds chirping, and soft voices carried from afar in the breeze. Large birds floated across the valley, swooping in wide arcs and circles. The field was bare and unsheltered from the sun. Even in the surprisingly cold Nepali winter, the sun heats you through and through while washing everything in a soft golden light.

Nearly 30 minutes passed before I even thought to take out my camera. 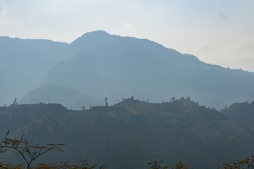 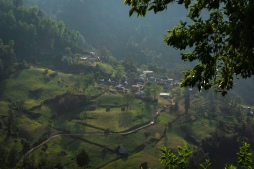 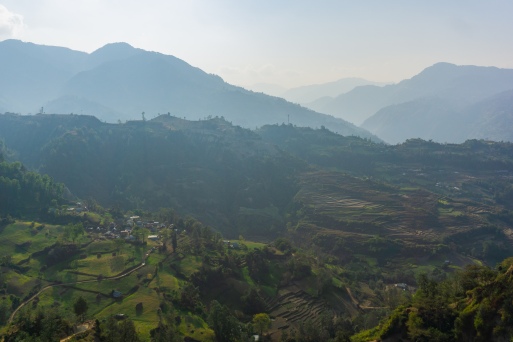 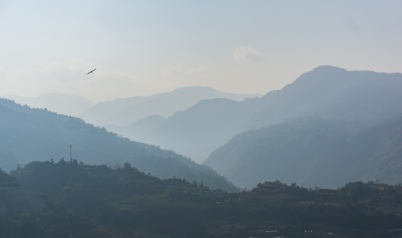 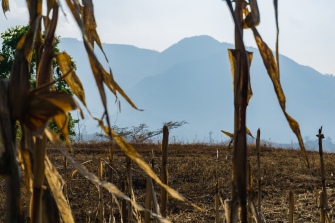 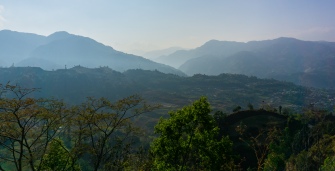 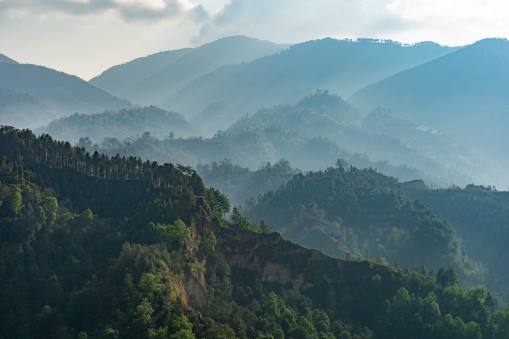 As the sun got lower in the sky, I decided it was time to go. The roads are perilous enough during the day, so I didn’t feel like dealing with them at night. Retracing my steps was easy enough. I felt satisfied with my excursion and was ready to make the drive back into Kathmandu, until I was passing a ridge that overlooked an expanse of rice terraces. I pulled over and thought a moment. I kept driving and pulled over again. The temptation was frustratingly strong, and I groaned as I stepped off my scooter and began scrambling up the nearby ridge for a better view.

On one side was the wide expanse of rice terraces that occupied the entire valley, walled in by steep, jungled mountains. On the other side was an even more vast panorama, limited only by the clouds and haze that envelop Kathmandu. I sat and watched for some time, observing the passers-by on the road some thirty feet below me. Farmers went about their work preparing the fields for the next season. Small scooters struggled to carry families of three and four up the mountain to their villages. Occasionally, a white bird gliding across the valley glinted in the sun. I took as many photos as I could before I decided I had to be moving back to Kathmandu. 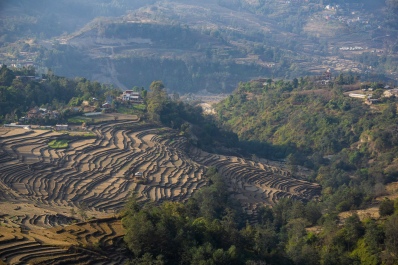 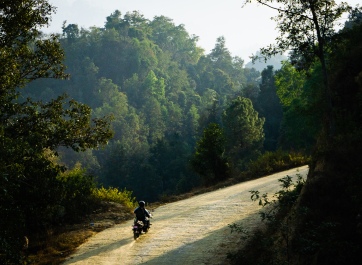 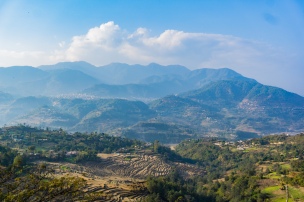 Satisfied with my day and recovered from a week of disinterest, I got back on the road. I cranked up the music in my earbuds and followed my way back to the big city. This won’t be the last time I take a day trip out here, and I might even spend a weekend sometime. But for now, I’m happy to be back doing new things and writing for the sake of it.