Yes, Indian, not Nepalese. I had to double-check when I was there. I haven’t yet had the pleasure of attending a Nepalese wedding, but this wedding for an Indian family of which my friend is a part was absolutely fantastic. It was the single-most grand and extravagant event I have ever been to, and am likely to attend again for a long time. So let’s start at the beginning of the night.

My roommate (my plus one) and I took off on my scooter after a brief checking of the map. We were bound for Hotel Yak & Yeti, which is on Durbarmarg and Kingsway — basically the grandest street in Kathmandu. It’s where the old Royal Palace is located. It should’ve been easy to find, but as is the case in Nepal, nothing is easy to find. I also thought I knew where it was and went to the wrong Yeti-themed hotel.

We made it to Kingsway, where I pulled over by a policeman and asked for directions. “Dai, where’s the Yak & Yeti?” (Side note: Dai means “older brother” and is generally what you call men you don’t know. Didi is the equivalent for women). He smiled and gave a cheery response.

“Left side of the road! Straight down!”

We took off, watching the left side, and saw nothing. So we turned left at the end, thinking it might be near the other hotels. Soon I knew we were off-course for sure, and I pulled over a second time.

“Turn back, left then right!”

We turned around and followed the directions, basically ending up back where we started. I saw an alley where a few extravagantly-dressed Nepalese men were standing, and I figured that might be the wedding. We drove down, and while we did find a wedding, it was not the one we were looking for (it’s wedding season in Nepal). Again, we asked for directions.

And again, we were off. We followed the directions until I saw a street that had a feature I recognized from the map, and we turned down there. The road forked left and right, winding back towards the same place we started. Not willing to go onto Kingsroad a third time, I pulled over and knocked on a taxi window. This time, he just pointed and made a sweeping motion with his hand as if to say over there somewhere. It wouldn’t be the first time I’ve gotten such vague directions here.

We went in the general direction he pointed, which brought us onto Kingsroad. After a few moments, my friend pointed to a tiny sign on a wooden post.

We pulled off and walked down the alley, following small signs on corners like we were following clues to treasure. Once more, we asked someone on the street for directions, and finally we were pointed the right way. And it was a treasure — a literal palace.

Though we were invited — all of the teachers at my school were (a whole six of us) — there was a single person actually affiliated with the wedding who knew us. For the rest of the time, I was a white guy with a camera wandering around and eating free food. But that said, the only one who felt weird about my presence was me. One Nepalese friend who was in attendance told me that people love it when foreigners come, like it’s a compliment.

Whether people appreciated my presence or not, I can’t say, but I do know this — everyone was so nice to me the whole night. Strangers would come and ask where I’m from. They’d make sure that I knew where the food was. Several came to give me warm, smiling welcomes. I found out later one such stranger was the groom’s father. He had no idea who I was or where I came from, yet took the time from an undoubtedly extremely busy night for him to make sure I felt welcome.

When we first arrived, the entrance to the building was blocked by an energetic crowd, all dancing and hollering with drummers and brass players surrounding the fringe. It was moving slowly into the hotel, but it was a slow procession. I took a few photos that came out grainy and ultimately unusable before we were led by our friend around through the main lobby of the hotel.

We followed down a long hallway lined with cases of statues and crafts until we came to a massive room with an imperial staircase leading to the upper floor. It was there that we watched the procession come filing through a narrow entrance. First came drummers and dancers, then men and women in colorful traditional Indian dress, and finally the groom himself. In his ornate tunic and feathered headdress, I felt like I was watching a king and his entourage come through the door. 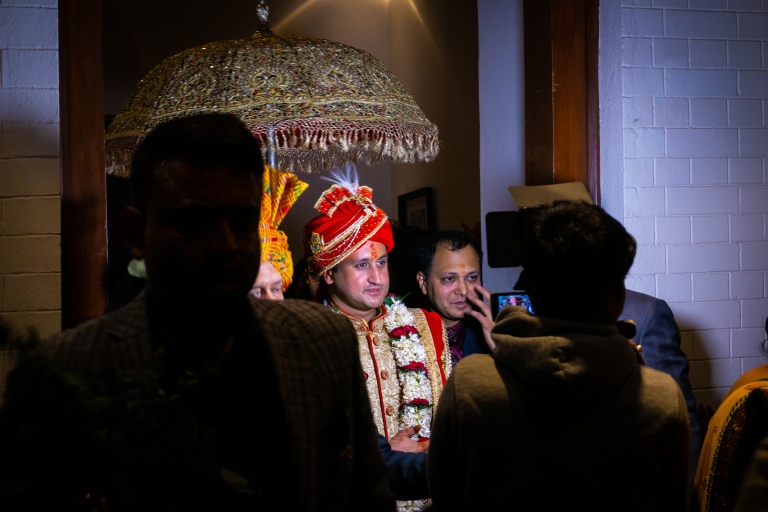 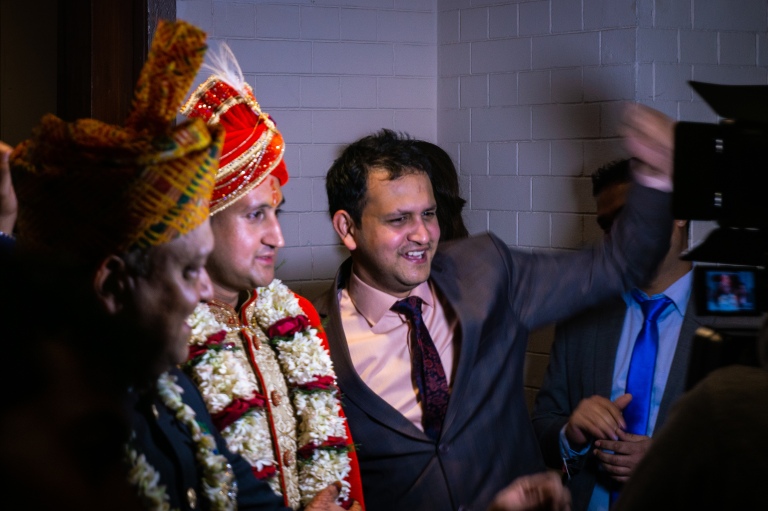 The procession of dancers and drummers spilled through the arched door and filled the room beneath the grand imperial stairs, becoming more and more densely-packed. By the time the floor was full, easily a hundred people were laying down the moves and more were piling in. The crowd eventually had to push up the stairs, where I had been standing with my camera.

I stood my ground against the dance mob that was steadily heading my way, pointing my camera out in the crowd. It’s a rare environment where everyone is just on their feet dancing. A completely judgement-free zone where the focus is nothing but fun. It’s a beautiful thing to be a part of and to witness.

And no one was having more fun than my man in the orange headdress. 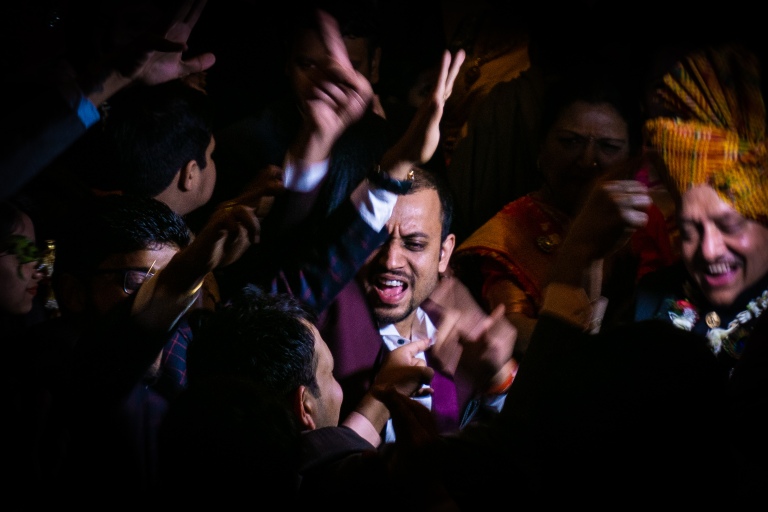 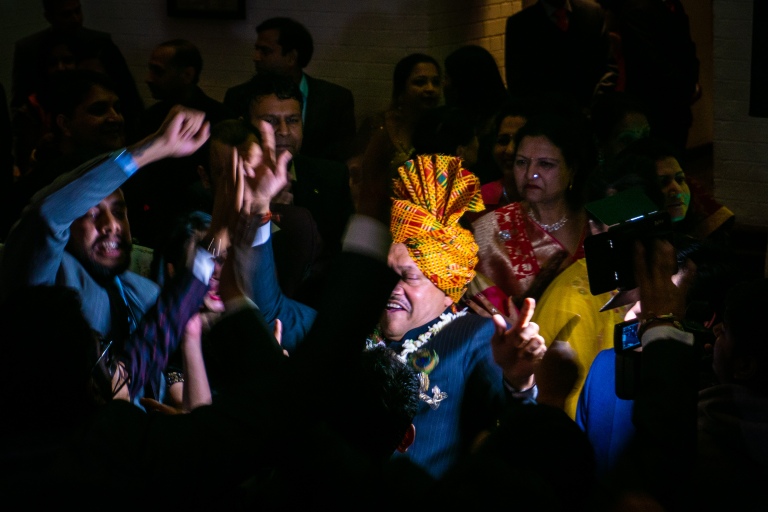 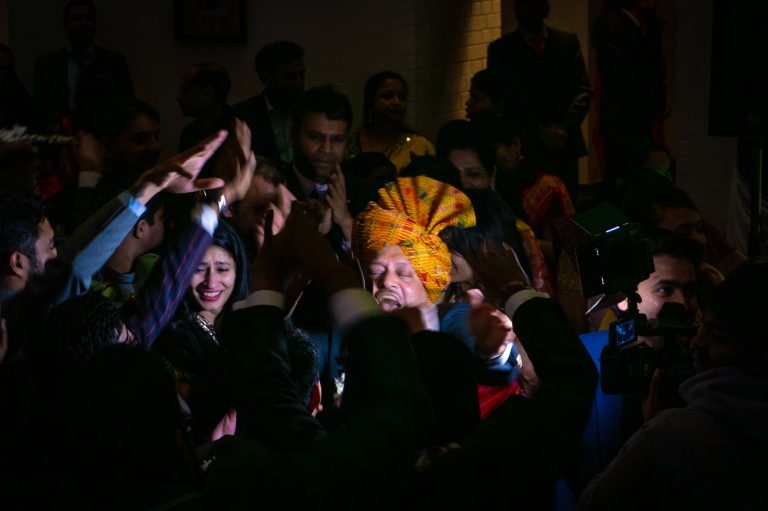 I wanted to stay longer, but soon realized that I had inadvertently joined the official wedding photographers on the stairs. As the crowd moved up, the photographers moved with them and took me along for the ride. The band came next, leading a contingent of dancers onto the second floor, and I finally had to move. I was swept up in the band and its entourage as it moved up the stairs and down the flowered hallway above. Walking down the hallway with the band felt like entering the palace in the Emerald City of Oz. The Feast and the Speakeasy

Once I made it a few meters down the flowered hall, I realized just how massive of an affair this wedding was. The hall diverged into two, both lined with chefs and food, and both packed to the point of bursting. My Nepalese friend led me down the tables, pointing out foods whose names I can now only guess at. There were jalebis made fresh, some sort of milk dish with the consistency of mashed potatoes (and it was amazing), as well as a bizarre frankensoup.

This was the best part.

There were maybe 20 bowls of different ingredients — shredded onion and cabbage, friend potato balls(?), small samosas, and many more that I had no guess for. The guy at the station crushed up the samosas and potato balls, filled the bowl with  handful of every other ingredient, and then poured a coconut-peanut curry soup over the whole thing. I have no idea what it was, but it might’ve been one of the best dishes I’ve eaten since I came to Kathmandu. 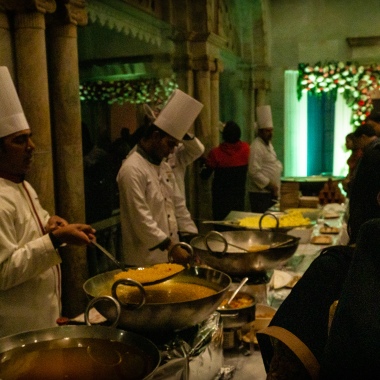 After eating in the hall, we were brought into the main event room. It could have easily fit the school building I teach at three times over. In the center was a brightly-lit stage with two ornate thrones, occupied by the bride and groom. It was my first time seeing the bride since I arrived, and her outfit stole the show from the already extravagantly-dressed groom. I love Indian and Nepalese-style clothing, and this entire wedding was like a fashion show for the best India and Nepal had to offer. 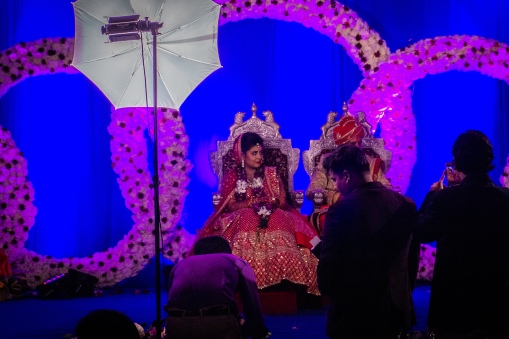 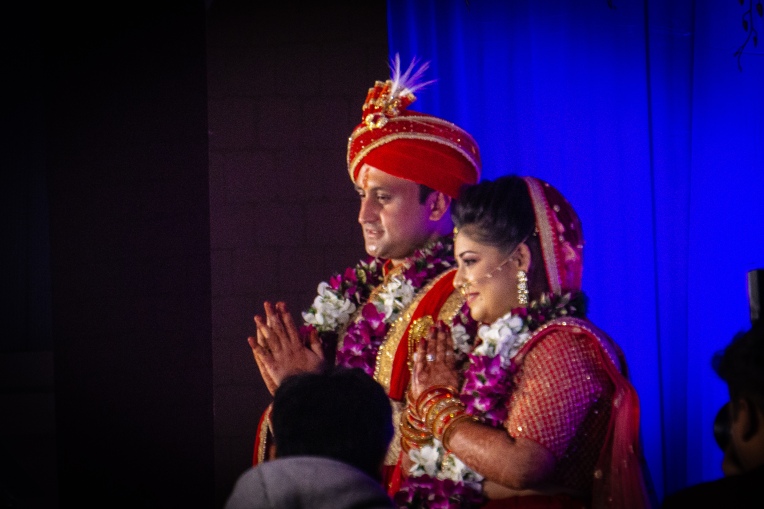 Our little group went to a table near the corner to listen to the band play. A different band this time. Actually, the third band. We watched friends and relatives cross the stage to pay their respects to the bride and groom for awhile, but eventually grew restless.

A few of us decided to go get some drinks and went off to see if there was a bar. We fought our way down the crowded hall, picking up jalebis and whatever else was in arm’s reach as we traversed the chef’s tables. The crowd eventually thinned and came to an abrupt end not long after the food went out of reach, and we continued on our way. At the end of the hall, far removed from the other festivities, was another room. We went in and asked if there was any beer, and were informed that there was only whiskey.

“They’re discussing business deals. This sort of thing always goes down at weddings.”

We looked at each other and nodded. Business deals in the back room saloon. The only thing missing was a guy asking for a password. It was there that we spent most of the night, fending off waiters who insisted that we needed more whiskey.

When we eventually went back to the main hall, the crowd had significantly thinned. The actual ceremony was not set to start for another several hours — around 1:00 AM. The band was still playing, though the music was quieter and more mellow. A few still grazed the buffet tables and I went to join them. It was definitely the calm before the festivities resumed again. I browsed the remaining food, and came away with chana masala, rice, and ice cream.

By 11:00 PM, my friend who I came with and I were the only two left from our group. All of us had classes to teach in the morning. I looked around for my friend who had invited us and we gave him our thanks and passed along our congratulations to the bride and groom and their families. We finished our food and excused ourselves, which turned out to be the right move as it surprisingly started raining right when we returned, and continued raining all night.

One thought on “Indian Wedding”