Among the literal hundreds of festivals and holidays observed in Nepal, one of the most well-known is Maha Shivaratri. And when you get just one Shivaratri in Nepal, then the place to go is Pashupatinath Temple. There’s just no comparison.

In essence, it’s a Hindu holiday devoted to celebrating Shiva. It’s actually celebrated every month, but Maha Shivaratri is the greatest of them all.

The focus is overcoming darkness and ignorance, so devotees often keep vigil all night into the morning. Most Hindu festivals are energetic and loud, celebrated in the daytime. Shivaratri is an exception to both of these. The actual festival begins at night and observance means self-reflection, social harmony, and meditation. As a result, the temple is swathed in tangible quiet despite the massive crowds it draws.

The origin stories of Maha Shivaratri vary. Some say that it commemorates the night Shiva performs his dance of creation and destruction. By chanting hymns and reading scriptures of Shiva, devotees can join in on the cosmic dance (particularly Shaiva Hindus). Others say it’s celebrated to cleanse oneself of their sins and realign oneself on a more righteous path.

Simply put, Pashupatinath is one of the most sacred Hindu sites in Asia. It’s one of the 275 places where Shiva is said to live. With tens of millions of Hindus in Nepal, India, and beyond, these sites all get their fair share of devotion.

As a result, this year’s Shivaratri drew a crowd of roughly 1.3 million.

We left around 4:00 to head towards the temple. Several taxis refused to take us due to the crowd heading in that direction. When we finally got one to agree, we buckled in for what turned out to be an hour-and-a-half taxi ride that didn’t get us at all close to the temple.

Nepal is 80% Hindu, so it’s not like a lot of Kathmandu was sitting at home. After our driver tried unsuccessfully to find alternate routes through the crowd, he bit the bullet and went with everyone else. At first it was just slow, but as the alleys got narrower, the closer the misses got. People started folding in their mirrors to pass each other with centimeters to spare. Most people got through without incident, but we were not as lucky. As a sedan that was far too big to have any business on a street that narrow tried to squeeze past, a loud metallic squeak came from between our vehicles followed by a loud snap. Our driver jumped out to yell at the sedan’s driver, and we sat for a moment. But we decided it was best to leave, and gave our driver cab fare while he tore into the offender over his mostly-separated bumper.

We waded through the cars and climbed down a small wall to join the crowds along the river, following them north to Pashupatinath. The closer we got, the denser the crowd became. At first, it didn’t seem too bad. The crowd wasn’t much crazier than your average Fourth of July crowd in the US. But as the smoke, dust, and smog cleared, we were faced with the reality of it: A sea of people so thick that it looked more like the static on a TV screen, except it moved a lot less. 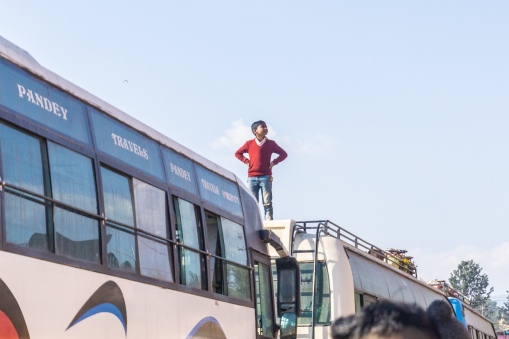 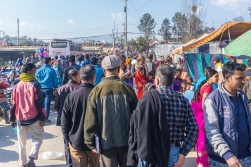 After a brief exchange of looks, we pushed forward, joining the 1.3 million others who had the same idea. We were immediately shoulder-to-shoulder with a lot of people who looked like they were regretting their decision. The crowed flowed up the street, towards the woods. On the way, we came to a clearing in the people, gathered around someone. On our toes, we could barely see a snake in the middle with a couple men sitting around it, but that was it. So I’m choosing to believe it was a snake charmer, though I’m probably wrong.

Part II: “I Don’t Gandalf Meant For Us To Come This Way…”

As the crowd funneled through a break in the fence, it broke through and people began scattering into the woods. With no indication as to which was the best route, we just fell in line, crossed a small river of sewage (no doubt part of the reason the area was fenced off), and took off into the forested hills.

In every direction, people were scrambling up steep slopes, dress shoes and high heels be damned. The colorful saris and robes clashed against the mostly brown forest, weaving in and out of the trees as they scrambled up and tumbled down again. Whenever the path came to a steep decline, the line in front of us sped up as people sprinted down the hill to get momentum to carry them up the next one. We took it a bit slower, though people zoomed past us on either side anyway. It felt more like rush hour in downtown Kathmandu than a walk in the woods.

Once the ground evened out some, every available space that was even moderately hidden was occupied by groups of people smoking weed and hash together. As it was explained to me, Shiva is commonly depicted smoking marijuana and so that’s one of the ways people honor him on Maha Shivaratri. For one day, everything’s legal at Pashupatinath because after all, are the police going to arrest 1.3 million people?

After resting for awhile, we got up and continued, finding ourselves at the temple on top of the hill overlooking the rest of Pashupatinath and a lot of Kathmandu as well.

Part III: Moshing with the Cows

When we arrived at the upper temple, the crowd thinned substantially as there was finally a bigger space for it to occupy. There was one large gathering near a large temple structure, so I went over with my camera for a better look. In the middle was a guy railing on a huge madal, a type of Nepalese drum. I watched for a few minutes, but figured I’d see plenty of music. However, that was when I noticed a guy towering over the crowd on meter-high stilts. He wobbled and danced his way in circles through the clear space, leaning over the spectators who would flinch and jump back, laughing and cheering. All around, people crammed for a view, holding kids up to see. The acrobatic drama held the attention of all in the crowd but frankly, did not hold mine for long. 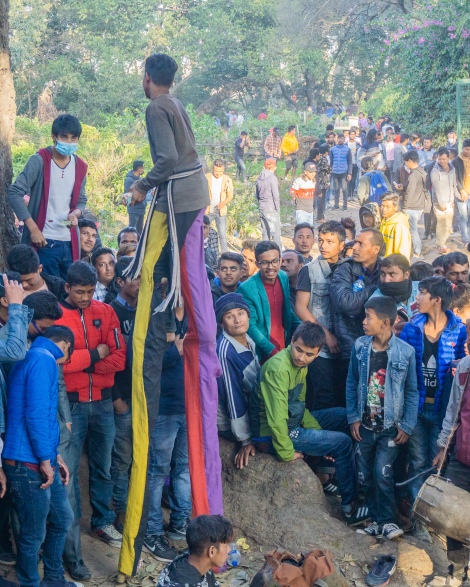 We continued around, winding through large shrines that peppered the mountaintop. Hidden behind each one was a couple or two, who barely noticed as we stepped over them to get by. Music echoed through them, and as we advanced, we came to realize it was EDM pulsing through the ancient walls. In one courtyard mostly contained by temple walls and shrines, there was a dance group jumping and hollering to the beat of a DJ under an old roof. We skirted around, dancing a little as Nepali guys called us over to join their circles. Soon, the individual shrines gave way to a cobbled walkway, which in turn gave way to a massive wall that stretched around and down a grand staircase. The crowd was thicker here, and made its way to the top of that staircase. We walked to a ledge overlooking the stairs, which had smaller ledges making their way down to them. When I turned, I caught a Nepali kid taking a selfie with me. We took one together, then I took his photo. We searched around for a way down the ledges to the crowd, and starting climbing them to get closer. As we scrambled down, a cheer came from below us. When we paused to look, we saw a gap forming as people pushed and inched away from a bull that strutted down the stairs. People laughed as they pushed away from the edge, watching the bull with wide eyes. We stayed up on the ledge, watching the pandemonium from above and waiting for it to pass before joining the crowd.

Further down, a similar cheer and a much more aggressive rush came when a holy man made his way up the stairs. People shoved their way closer, hoping for a blessing from the priest as he waved his arms and beckoned to people in the crowd. Many were crawling over a nearby wall to get a better view, so I joined them. I swung my legs over and began to lean, but suddenly slid backwards. I reached out and thankfully caught a small crack while bystanders grabbed me and hoisted me over. We walked down the grassy hill instead of the stairs as we skipped the line to the main temple complex.

Once we made our way to the river, we walked through the stands looking for food. I came away with accidentally ordering a soup that was an amalgam of samosa pieces, shredded onion and cabbage, rice balls, and curry. A man stopped us, a kit of tika powder around his neck.

His hand came whipping into view and left a swipe of tika on each of our foreheads as we tried to evade him. His other hand would then come into view as he asked for a donation to the temple. I was annoyed, but told him I’d only donate if I could take his photo.

He then pointed across the river, drawing our attention to the funerals that were to begin. We sat on a ledge and watched the bodies begin to burn on a ghat, a ledge along the river where open-air cremations took place. We slowly began to exchange sunlight for firelight as the two shrank and grew. The fires rose higher, smoke enveloping the pagoda roof above each of them. We walked closer, standing on the banks with other onlookers. After some time, we crossed the bridge and came to walk past the fires on their side of the river, where we watched caretakers push at the embers with long poles. We walked away, coming to a bridge where a crowd was forming. People pushed their way for view over a canyon of temple that overlooked the river. Crowds had formed on both sides, watching dancers weave through the ledges. As the sun went down and braziers fired up along the river, I experienced the distinctly otherwordly feeling the environment brought. I felt like I was watching something alongside people not from this millennium with the same experience. We continued to push across the bridge, eventually coming to climb a nearby wall to get a better view. After we sat atop the wall for some time, watching the crowd move, we got up and decided to head for home, satisfied by what we had seen. Personally, I had had enough of Pashupatinath. Interesting as it was, a weird solemness hangs over the temple, permeating the buildings with an ancient sense of spirituality. Others that describe the temple shudder at the feeling of death they feel there. 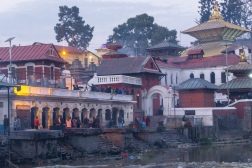 After a long walk out of the temple complex, following the line waiting for entry as we delved into the streets and looked for a taxi to take home. We ordered pasta at an Italian cafe nearby our apartments and ate quietly, examining our photos and finally relaxing after the crowd of 1.3 million.