We awoke to cold winds and rain high up along the river at a mountain truck stop. Goats and sheep milled around outside the tent and made their goat and sheep noises while a boy on a horse whooped in the distance to spur on the flock. I climbed out, hungover and exhausted after a night far too cold to sleep, when the fleeting warmth of vodka did little to dampen the freezing temperatures.

Across the river was a restaurant we had stopped at the night before. We ordered hot tea and bread with cheese for just a few hundred som, or a couple dollars. Some hard-boiled eggs sat on a plate for those who felt lucky, and a water bottle filled with herbs and opaque liquid behind it. I was satisfied with my tea and bread.

Once finished, we thanked the family who ran the restaurant and stepped out into the cold to once again find a ride.

As was always the case on the Pamir Highway, a ride was not difficult to find. We wrote “Суусамир” (Suusamyr) on our sign and started waving down drivers. The Suusamyr Valley is a famous part of Kyrgyzstan, and is the first and only major landmark when the road splits to go to either Bishkek or Issyk-Kul. We needed to get on the road towards Issyk-Kul, which was much less traveled.

But for now, we quickly found a Kyrgyz trucker who was happy to bring us down the road to the fork. No English was spoken but he was kind. Almost immediately, police stopped us and he had to exit. Apparently it’s a common occurrence in Kyrgyzstan, hitchhikers present or not. He returned after 20 minutes and we continued.

The road sloped down the backside of Ala-Bel Pass, winding through the valley as the truck careened for lower altitudes. Our Uzbek drivers the day before had driven quite slowly; this Kyrgyz driver was a madman by comparison. When he screeched to a halt at the fork, we were all to happy to exit. We thanked him for his help, then took out our sign again, expecting a long wait now that we were off the main road.

But no sooner did we get out than a rickety old truck pulled up and gave us a lift. It was a man and his 11-year-old daughter, as we learned, bound for Suusamyr, the main town in the valley. She gave us some vegetables to eat as the truck bumped its way down the road.

When we arrived in Suusamyr, we sat down by the road and knew the long waits would begin now. I don’t know how long we sat there, but it must have been at least an hour. We decided we were making no progress; every car on the street was stopping in Suusamyr. Instead, we hiked down the road a couple kilometers until we were outside the town. Another hour passed, until a shaky old military truck hobbled by. The guy inside, an ecologist in the valley, gave us a ride to the next town where his parents lived.

The next town, however, was barren. No food for us to resupply with, and no cars going past. We convinced a woman to open her store for us, but she was promptly scared away when a car full of Polish guys zoomed up and they jumped out, exclaiming, “Holy shit, white people!”

Pro tip, wherever you go, don’t be those people.

With our one food resource scared away, we sat down in the street again. It took several hours of sitting and waiting without a single car, but eventually one came. An old Soviet sedan rolled up and the driver enthusiastically yelled out, “Kyzyl-Oy?”

I checked my map and saw that Kyzyl-Oy was better than where we were now, not that the bar was high, and so we jumped in with them, eager to leave this place behind.

So I make a second section for this because I’m not sure how to define what followed. The driver zoomed down the narrowing valley along the river, fighting heavy winds and dust clouds along the way. They tried to communicate with lots of hand motions, but very little was understood. Eventually, however, the message was somewhat communicated that we’d eat together.

The drivers took us into the village, to their own home. Our bags were left in the car and we were taken to show beds. At no point were we asked or checked with, so I feel like it technically qualifies as a kidnapping, albeit a quite benevolent one. We were given beds and food and tea, and spent the afternoon and evening with a Kyrgyz family without a word of English spoken. For some time, I left to take photos of the village while my friend was trapped entertaining the 4-year-old who lived there as well.

Upon my return, I was instructed to join the men in the house while the women prepared dinner. “Televizor, televizor.” It seemed to be a requirement. Normally, I prefer being in the kitchen for the more fun environment and ability to watch how foreign food is prepared. But I was forced to content myself with watching Alvin & The Chipmunks: The Squeakquel with Russian dubs.

When the movie was finally over, we were allowed to rejoin for a meal or boiled potatoes and lamb with little dough balls and jam. It was actually very good. 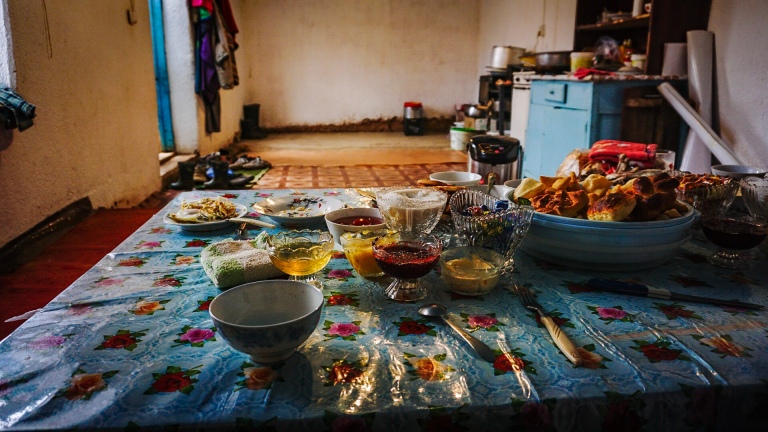 Dinner and tea went on for hours, until I decided to retire for bed around midnight. It was my first night in several with a bed and blankets, so I slept hard.

I awoke late, and went to the kitchen to receive some bread and jam despite missing breakfast. We all had tea again for another hour before we decided to pack up our gear and try to get a ride out of Kyzyl-Oy. I snapped a photo of the family before I left. 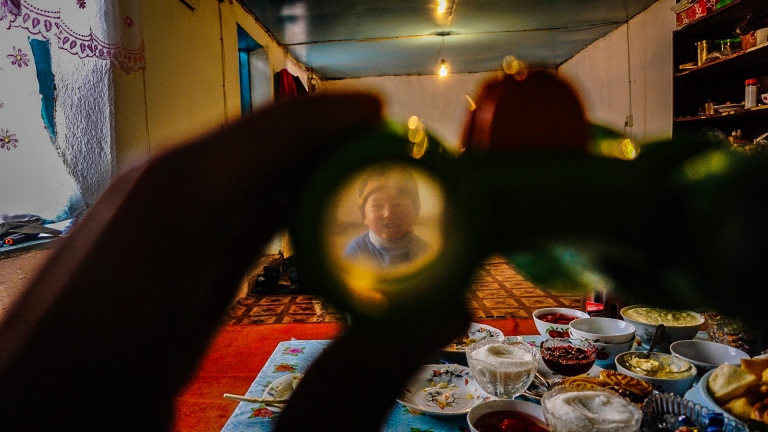 Once we said our goodbyes, we set off for the traffic light in the center of town. The only traffic light between Osh and Bishkek, and it’s in Kyzyl-Oy of all places.

Very few cars came past, and what few that did were taxis that demanded prices equivalent to my monthly rent in Kathmandu. Many tried to convince us no one was coming. And for several hours, no one did. Until another rickety old military truck came creaking around the corner.

It was two young guys, beekeepers, who gave us a ride next. The one who spoke English was a 21-year-old Business student at university in Bishkek. I’m still not sure why he was in that truck.

We continued on through the valley, our driver weaving through massive holes in the road as his two trailers, one full of honey and the other with a horse, bounced along behind. In front of us, the valley wound its way through the Martian landscape until the snow capped Tien Shan Mountains became visible at the end. 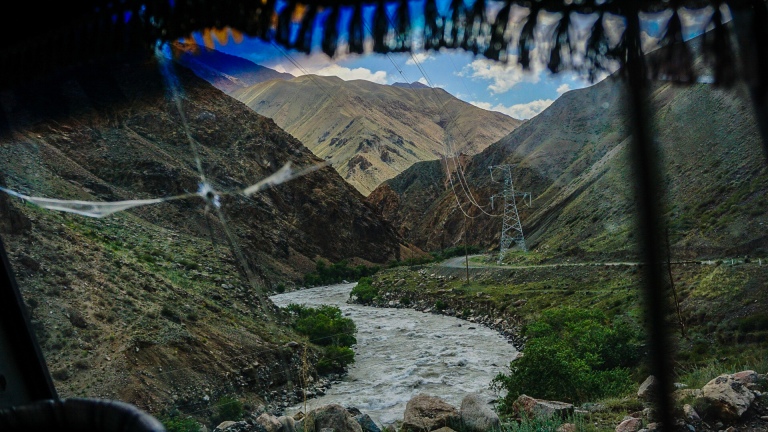 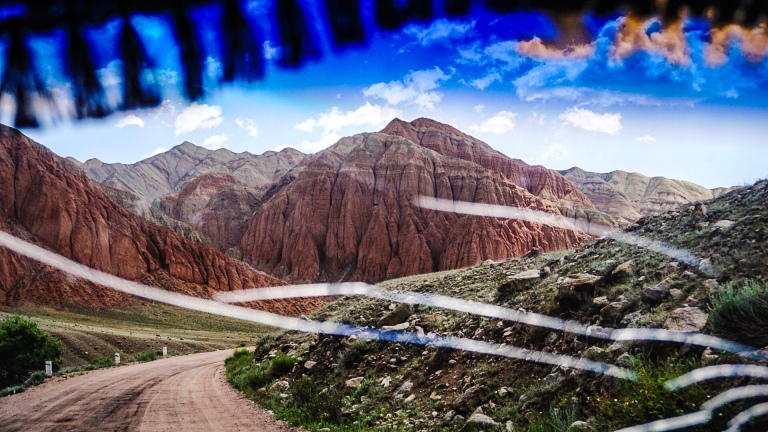 Our ride lasted less than an hour before the truck ground to a stop just past the valley. The driver cursed in Kyrgyz. The other guy shrugged and said, “No petrol.” He was confident someone would come along with more gas, but in the meantime, we were stuck. I laid under a tree and listened to music, sometimes taking some photos. Not much going on in rural Kyrgyzstan.

We were stuck in the hot sun for two hours, waiting on a friend of our driver to come bail us out with a tank of gas. When they finally did arrive, we were off again in minutes. Our driver floored it to make up for lost time, and almost instantly hit a bump so hard he almost lost the trailer with the horse. Almost instantly after that, we came onto a paved road. We had been so close the whole time.

They only brought us to the next town, called Chayek. Some young guys on the street came to observe as we looked for a new ride, laughing whenever a car blew past. Still, it took no more than 45 minutes to find another ride who took us all the way to a town called Kyzart, at the base of the mountains that surround a massive alpine lake called Son-Kul. It was my friend’s goal to get there, though mine laid further ahead. It didn’t take long to arrive and the drive to get there was somewhat uneventful, save the driver slamming on the breaks to go wash his hands in the jet of a broken pipe. He invited us to do the same.

In Kyzart, we found a guest house and food. We made a new German friend. And we prepped for our paths to diverge. Tomorrow, my friend would head off to find Son-Kul with our new German friend, and I would set off alone on my spirit quest to Kara-Kol Lake in the far northeast.

One thought on “Hitchhiking Diaries Pt. 2”