I’m coming back to this post once again. Over the past week, I’ve sat down like four times, written a few paragraphs, gotten stuck, and left. Then I sit down, re-read whatever I had written before, and delete it to start anew. I’m trying (and apparently failing) to come up with some accurate description of what it feels like to be on the ground in Baku.

It’s this amalgam of cultures. It’s Iran, it’s Turkey, it’s Russia, it’s the West, it’s the Middle East, its….Azerbaijan! In my albeit limited travels thus far, I haven’t seen a place that is such an obvious fusion than Baku. Women in full burqas sat side-by-side with girls wearing a whole lot less than that. Men in skull caps and full beards walked with their sons in skinny jeans and Chicago Bulls jerseys. I’m sure this is a total cliche of an observation, but it’s surprising when you haven’t seen that sort of contrast before (and seeing it in America or any of the West doesn’t count).

The Azeri language is very similar to Turkish, so much so that the two are mutually intelligible. Meaning, an Azeri speaker and a Turkish speaker can talk to each other in their respective languages and still more or less have a conversation. Spanish speakers and Portuguese speakers can do the same thing. Dutch and Flemish, Italian and Spanish, Nepali and Hindi, the list goes on. No such adjacent language exists for English.

But the point of that is a lot of Azeri culture derives from Turkey. Former Azeri president Heydar Aliyev (who is kind of a Soviet-era hero figure) once described the two countries as “one nation with two states.” While Baku is a mixture of everything in the area (namely Russia, Turkey, and Iran), there remains under and over everything a strong Turkic identity.

What Type of City is Baku?

Recently, I’ve begun thinking of cities in certain categories, namely the “welcomingness” factor. Big urban centers are not always known for being friendly places, so I’ll preface any sort of discussion about this by saying I get it.

As a traveler in Asia, you get used to being a bit of a novelty at times. I’m about to make a bit of a generalization, but people tend to like foreign travelers there. Or at the very least, they fake it. Baku isn’t quite on the global travel radar yet. People who live there (again, a generalization) don’t really care that you’re there. In Kathmandu and Beijing, I had people come to me on the street to welcome me to their country. Not so in Baku. Which brings me back to the “welcomingness” factor.

Cities tend to fall in one of three categories, maybe leaning one way or the other. There’s the welcoming cities, the ones that seem to be happy you’re there. Kathmandu is one such city. So is Ashgabat, believe it or not.

There’s the indifferent cities, the ones that are either too international or too big to care about you. Beijing and Bishkek fall into that one for me.

Then there’s the unwelcoming cities, the ones that don’t just seem indifferent to your presence but outright bothered by it. Baku, in my experience, falls into this one.

But of course this is yet another generalization. Obviously Baku is a mixture of people, some welcoming, some unwelcoming, some friendly, some not. It’s a big city. Every city with a tough reputation like New York or Paris is a mixture, and your impression of that city can rest entirely on the people you happen to meet. To me, the vibe of Baku skews towards the unwelcoming side. But I also met some very friendly people as well. It’s just a big city, and big cities don’t care about you. But they’re also places full of nice and interesting people.

So let’s take a look at Baku from the street level, shall we? (Side note: there will probably be some repeats from my previous post) 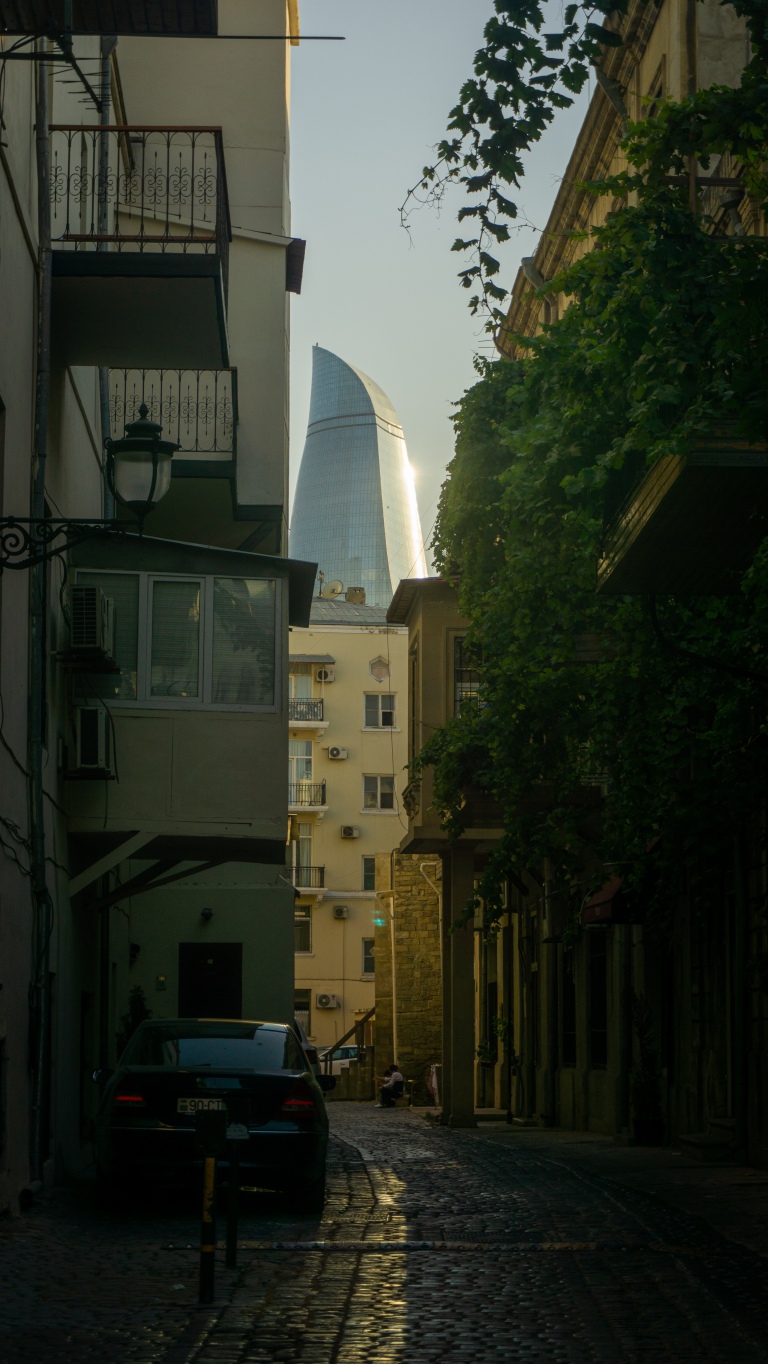 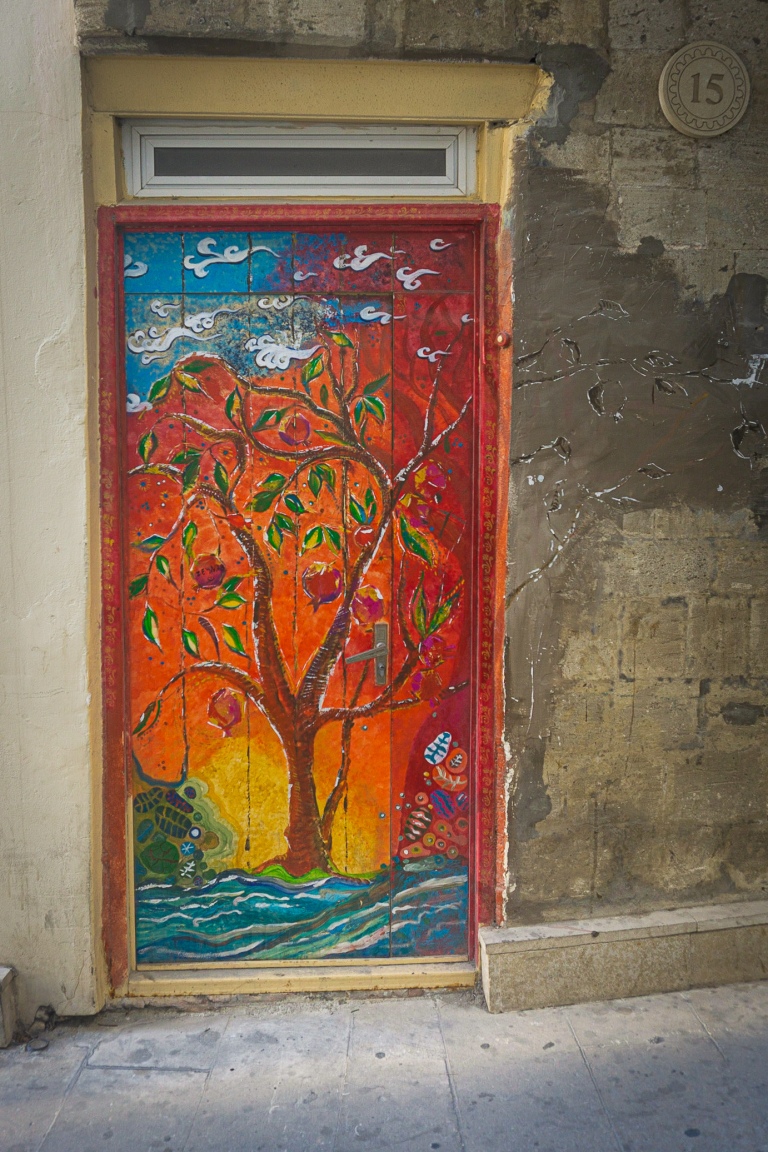 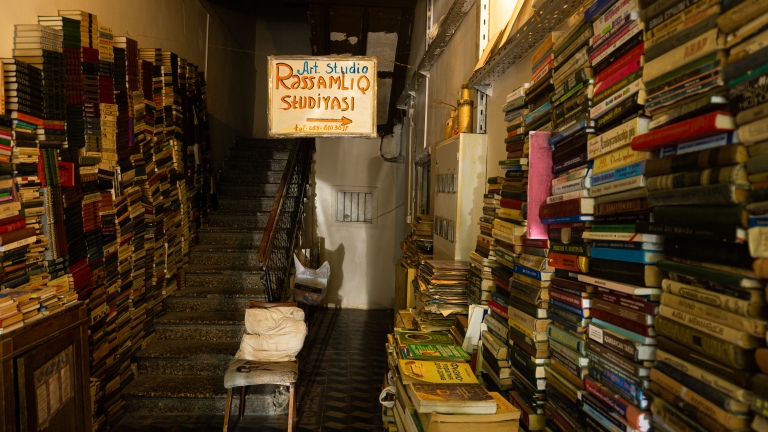 Before we move on from Baku, the city’s weirdest architectural feature deserves a shoutout: The Flame Towers!

From literally anywhere in Baku, you can see these three buildings. I don’t have to tell you that, though, since you’ve just seen a bunch of photos featuring them. But for as famous as they are, I didn’t know anything about them. Neither did a friend I made in Baku. So we decided on our final day to figure out what they were, and how high we could go into them.

I don’t know what I was expecting, but they’re hotels and apartments. There’s a movie theater, a few restaurants, and a swimming pool/bar on a platform between them, but that’s it. But still, they’re the coolest hotel-movie theater-pool-restaurant-bar-apartment you could ever ask to see. Lamborghini’s first Azerbaijan branch is in one of the towers as well. They were only completed in 2012, for a cost of 350 billion USD! An American firm, HOK, was the force behind their construction. 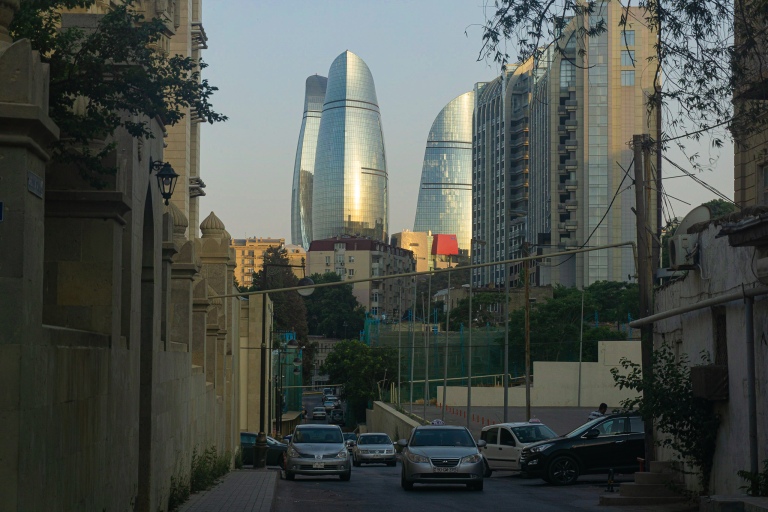 The flame theme might seem a little strange, but Azerbaijan is the land of fire. With natural gas deposits coming to the surface all over the rocky Caspian Sea coast, Azerbaijan is quite literally smoking. Fire has been a symbol in Azeri history and culture for thousands of years.

Zoroastrianism is one of the world’s oldest continuously-practiced religions. Its philosophies on afterlife and morality have influenced modern-day Christianity, Islam, and Judaism. Though it began in Persia (present-day Iran), Zoroastrianism has very strong roots in Azeri history. The Flame Towers were built to symbolize fire, the sign of Ahura Mazda, Zoroastrianism’s highest deity. For all you history and religion nerds out there, read up on Zoroastrianism. It’s an incredibly interesting religion.

Now back to the Flame Towers!

They’re essentially a massive nod to Azerbaijan’s history and heritage. Because they’re mostly apartments and hotels, you can’t just come in off the street and expect to get any higher than the restaurant on the fourth floor. But pesky things like rules and ID card-activated elevators have never stopped me when there’s a cool photo to be taken!

So join me on the 38th floor of the eastern tower! 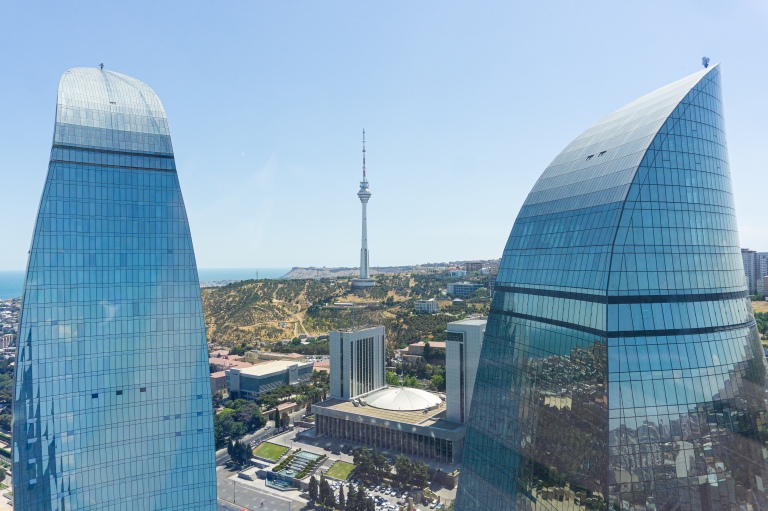 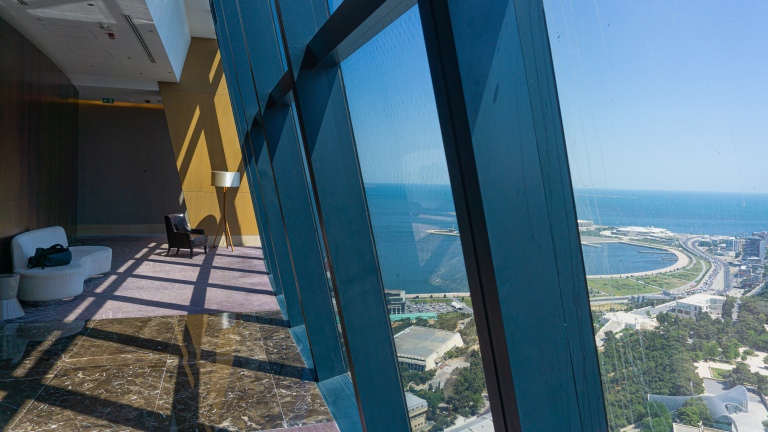 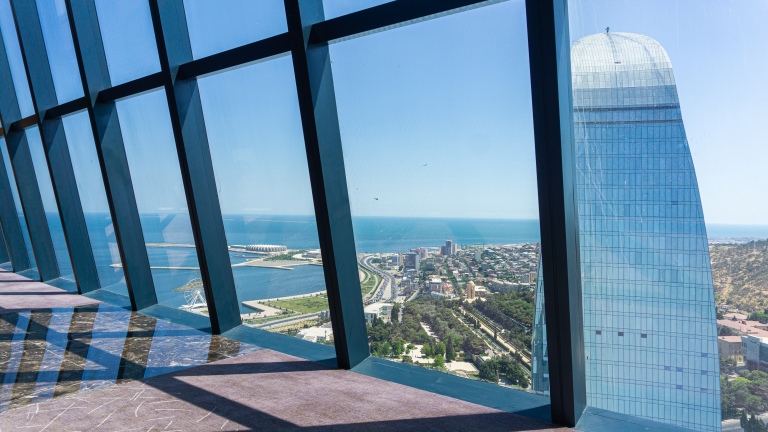 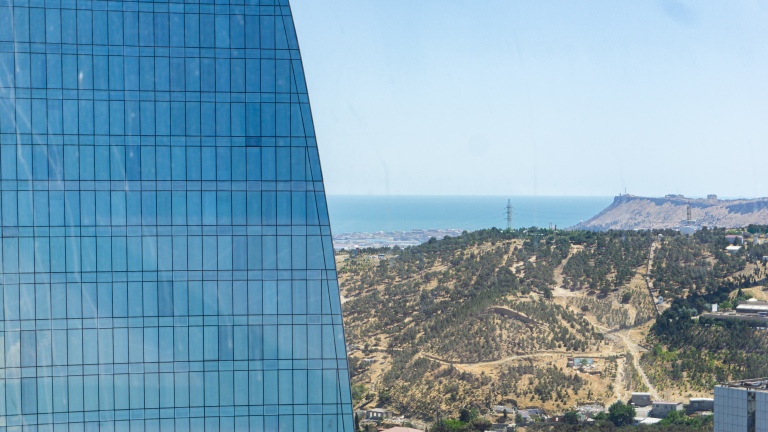 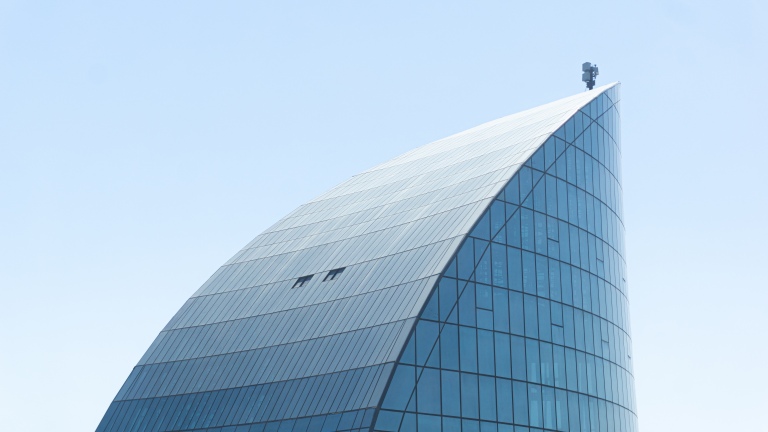 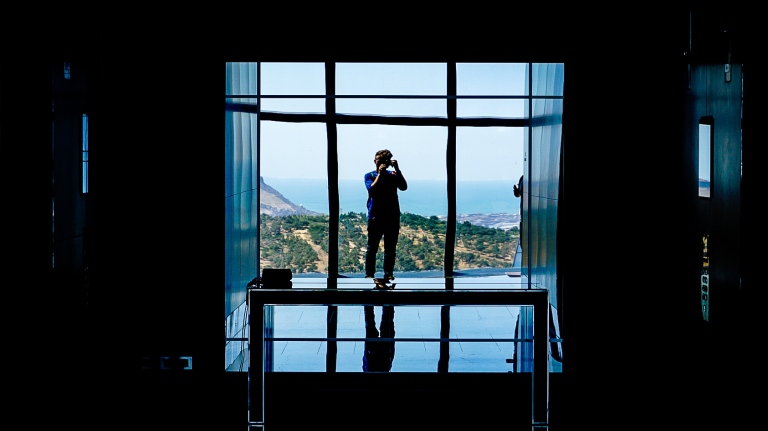 Also, the flame theme doesn’t just stop at the shape of the buildings. Each tower is coated entirely in LED screens, and at night, they are lit up like they’re on fire! I, unfortunately, did not witness the display, but the towers are all glowed up every night.

So at the end of it all, I’d say give Baku a visit!

One thought on “Baku Street Level”