On the full moon of every month, pilgrims and devotees gather at Boudhanath Stupa in the Boudha neighborhood of Kathmandu. Boudha is the Tibetan neighborhood and Boudhanath is the largest Buddhist stupa in Asia. I first learned of these celebrations on the 23rd of November, which ended up being the day immediately following that month’s full moon. So, I had been waiting for a month to come here.

First, even getting to Boudha is a commitment. I wasn’t kidding when I said in my last post that Boudha has some of the worst roads in Kathmandu. Unpaved, riddled with potholes, and three quarters of the vehicles on the road are massive buses. Driving a scooter on these roads is an experience. On one hand, weaving through buses and shooting rapidly-closing gaps is an experience out of a video game. On the other hand, weaving through buses and shooting rapidly-closing games is exactly the kind of thing to avoid when on a vehicle as unstable and small as a scooter.

It took close to 40 minutes to reach Boudhanath and the sun had long since set before I arrived. I parked my scooter and squeezed down a narrow alley that twisted its way through the wall of buildings. It eventually opened into the wide space that surrounds the stupa and was immediately immersed in place’s atmosphere.

When I stepped out into the actual complex, I was immediately swept up in a thick crowd moving clockwise around the stupa. A lot of the crowd was made up of monks, though many everyday people came to the stupa to pay homage as well.

There’s an important and common practice in Buddhism called circ…circumam… People walk in circles in a clockwise motion around holy sites to pay respects. Generally, the minimum number of rotations is three, and people often walk many more than that.

Such holy sites are stupas like Boudhanath or Swayambunath, or Bodhi trees, or images of Buddha. Other famous holy sites are places like Mt. Kailash in Tibet. Devotees walk clockwise to keep Buddha to their right, maintaining the circular path to hold Buddha’s teachings in the metaphorical center of their lives.

Walking clockwise has very old roots. Many agree that ‘clockwise’ is a sort of modern equivalent or adaptation of the old Sanskrit word for ‘sunwise.’ Circumambulating holy sites in a clockwise motion puts devotees on a path that is meant to mirror that of the Sun’s and the cardinal directions, each of which corresponds to Buddha’s major four deeds. East for birth, South for enlightenment, West for giving motion to the wheel of Dharma, and North for Buddha’s final liberation. By following the Sun’s path and circling holy sites clockwise, walkers symbolically follow Buddha’s path and therefore the right path.

I spent about two hours walking circles around the stupa, looking for different photo angles on each rotation. There comes a point when every photo begins to look the same, but the buildings surrounding the complex remained endlessly interesting. Regardless, after three or four rotations, photos became an afterthought. There is definitely something meditative and calming about making these rotations. Despite the crowd, it’s quiet. The only sounds to be heard were the occasional claps from monks and shouts from a troop of kids playing badminton, sometimes hitting passers-by with the birdie.

Despite the abundance of shops and merchants, very few of them actually solicited me to buy anything, which is quite different from most places that attract tourists here. On the rare occasion that someone would call me over, they’d be polite and kind when I told them I wasn’t looking to buy anything. Someone once told me that I should be careful in Boudha because of “Tibetan thugs,” but I’ve never gotten any such impression. Maybe I haven’t spent enough time in Boudha to know, but I felt like I was in the presence of some of the kindest people in Kathmandu (which is saying a lot).

I continued to walk and take photos, sometimes ducking into buildings to get to whatever rooftops were available to me. I’ve been trying to find a certain angle over the stupa that would get most of the complex, but it has thus far eluded me. 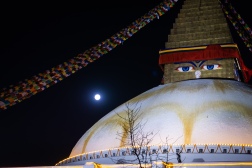 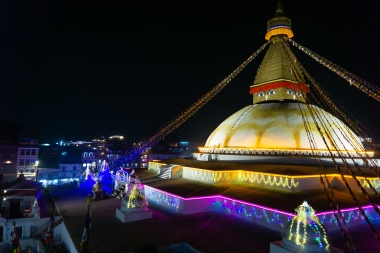 It was also during this time that I realized taking photos that involve the moon is a whole different ball game. The moon is there. But it’s definitely the worst part of the photo. So I’ll be spending more time with a camera pointed at the moon, trying to figure out what the deal is.