The best time of day to visit Swayambhunath Stupa (AKA the Monkey Temple) is easily sunset or sunrise. The stupa is on a hill in northwestern Kathmandu and overlooks the entirety of the city. During sunrise, you can see the sun coming up directly across the valley from the stupa, illuminating all of Kathmandu and the surrounding valley. At sunset, golden light is thrown across the city and makes it twinkle like gold. On clear nights and mornings, the looming peaks of the Langtang National Park near Tibet catch the light and glow like lanterns.

The best time of year to visit Swayambhu is, without a doubt, Tihar. You may know it by a more common name — Diwali, the festival of lights. Dates vary, but it generally falls at the very end of October. During Tihar, Kathmandu is lit up like Christmas.

During Christmas, America is lit up like Tihar. Or at least, it tries to be. Along every street, buildings are draped in hundreds of meters of twinkling, colored lights. I repeatedly felt like I was crossing the parted Red Sea as I drove down the brightly-lit thoroughfares. Waves of color cascade off every rooftop and illuminate the ancient walls in bright shades of pink and yellow and blue.

But from Swayambhu, we could see the lights of Tihar blinking across the entire city. Most of Kathmandu is usually pretty dark at night, but tonight, it shone like the night sky as the sun set.

Some Background About Swayambhunath

Swayambhunath is about 1,500 years old. Amazingly, it’s not even close to being the oldest site in Kathmandu. For Tibetans and followers of Tibetan Buddhism, Swayambhunath is second only to Boudhanath in terms of its holiness. For Newari Buddhists, it is likely the most sacred pilgrimage site, as the Newars are the people indigenous to the Kathmandu Valley. It is also revered by many Hindus, which makes it a gathering place for all the predominant cultures in the region.

In a previous post, I wrote some about the creation story of the Kathmandu Valley. Legend says there was once a lake that filled the valley. Manjushri, a prominent figure in Buddhism, had a vision of a lotus in the center of the lake. He drained the lake and the lotus settled on the lake bed. When the lotus came to rest at the bottom of the former lake, Manjushri raised a hill. That hill and lotus would become Swayambhu.

The dome of the stupa represents the entire world. The eyes at the top, which adorn every stupa in Nepal, are the eyes of Buddha. There are two eyes for wisdom and compassion, which are opened when one awakens into enlightenment. The third eye is said to open when Buddha preaches, and draws all those who are interested to hear him speak. Beneath the eyes is a symbol that looks a little like a question mark. In truth, it’s the Nepali symbol for the number 1, and it represents both the unity and oneness of all things in the world, as well as the one path to enlightenment through Buddha’s teachings.

So essentially, each stupa is a visual representation of Buddhism.

There is also a creation story about the monkeys that brought Swayambhunath its nickname. While Manjushri was raising the hill that the temple stands on, he was supposed to keep his hair and beard short. Instead, he let it grow out and got lice. When the head lice fell from his hair, they became the sacred monkeys that inhabit the temple.

When we arrived at the temple, the sun was already on its way down. I lost precious time when a man stopped me for help. I was initially willing to hear him out, but it turned into a weird exchange.

“You’re American? Can you use pesos?”

I walked away after that, leaving him to look for other Americans who might be on the hunt for pesos in Kathmandu. I ascended the staircase to the temple and began to hear the screeches of monkeys and screams of tourists amidst the wind chimes and mantras. I wasn’t expecting quite as many monkeys as we were met with, but the tourist to monkey ratio was easily 3:1. It’s lucky they were busy chasing each other, because I don’t think we would’ve been able to hold them off for long.

Much of the stupa and surrounding temples are plated in gold, which caught the sunset beautifully. Chances to photograph the stupa sans tourists were rare. After all, we were all there for the same reason.

But for every tourist, there were just as many locals who came to relax, pray, and to sightsee. Swayambhunath is still a relatively locally-used site (at least compared to Boudhanath) and there remains a tangible spirituality in the air. The air was full of the bustle of hundreds of visitors, chattering in dozens of languages from throughout the world. But when the sun sank lower and the lights of Tihar lit up the valley, everyone grew still and just watched. 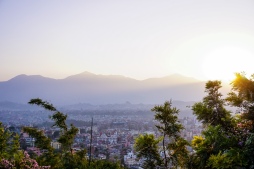 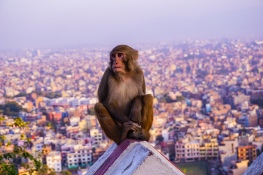 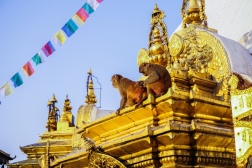 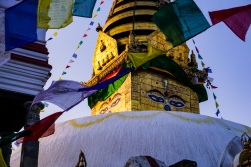 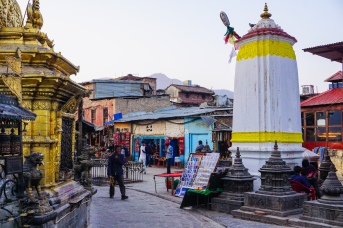 I neglected to bring my tripod and didn’t get any clear pictures of the city at night, which is a shame. On any other night, the view of Kathmandu from Swayambhu is mostly dark. Headlights illuminate the narrow streets and throw light up on the colored walls. The glows of small fires in the neighborhoods flicker and dance. But much of the city is just dark.

On Tihar, though, everything is alight. Twinkling lights adorn every building. Whole streets flash and blink in synchronized patterns, making pulses of color ripple across the city. Traffic is much lighter as everyone is home or away with relatives, which means there are very little sounds from the city except for the occasional bus horn. Instead, everyone stands in quiet reverence as the wind rustles through the prayer flags, carrying mantras up and away from us.

As I drove home through the shockingly empty streets, I had my first pang of homesickness. Tihar is one of the biggest holidays of Nepal. The festive atmosphere that makes me love Christmas back home so much was just as present in Kathmandu. The quiet streets and blinking lights brought forth all my memories of the holiday intangibles. If I closed my eyes, I could almost imagine that the muted colors on the other side of my eyelids were the colored lights illuminating the snow back home in Ohio. When I reached my apartment, I made dinner and took it up to my roof to look at the lights of my street and the rooftops of Patan.

2 thoughts on “Sunset at the Monkey Temple on Tihar”