I didn’t remember which day was Thanksgiving until I got a text from my parents at around 8:00 PM. I don’t remember what day it’s on most years anyway. It’s never been one of my favorite holidays, but it was still a little melancholy. For the first time, I wasn’t home for Thanksgiving. Instead, I was nearly 8,000 miles away and wondering if I should’ve tried to do anything.

That was when I got an invite to a Thanksgiving dinner from one of my fellow teachers…who was Australian. I just had to bring something for everyone to eat. Wanting to ensure that our Nepali-Australian-American Thanksgiving had the best (in my opinion, anyway) dish present, I quickly offered to make pumpkin bread. I figured it’d be pretty easy — I made it all the time in the US, after all.

The Hunt for a Pumpkin

Finding a pumpkin turned out to be amazingly difficult. By the time I actually found one, I had spent multiple days searching, during which time I:

Right from the start, I had been wanting to make pumpkin bread in Nepal, since it’s basically my favorite thing to bake. I’ve had two dishes so far that featured pumpkin, one of which was very traditional and very local. So I knew pumpkins had to be around here somewhere.

My first guess was the nearby supermarket. I gathered all my other ingredients, but had no idea where the pumpkins were. I was told they’re not like the big orange ones in the US; they look more like any other squash. So when I found myself standing in front of a big palette of orange and green things, I figured that I had found them. I bought one and left, but took a picture after to double-check if I was correct. At dinner that night, I showed my friends to  confirm that I had in fact bought a pumpkin.

So now I have a papaya the size of my thigh on my kitchen counter, and I don’t even like papayas that much.

I left the next day to continue my search. Someone told me about a vegetable stand behind a bar we both frequent that she had seen pumpkins at. I jumped on my scooter and took off, hoping today would be different. I must’ve taken a wrong turn, because once I passed the bar, it only took a few minutes to find myself by the river (which was like two or three kilometers away). By the time I got un-lost, the sun was down and I took my second L.

But the third day was different. I decided to check the same place in the morning to see if I’d have better luck. As I was driving down the road towards that same bar, I caught a vegetable stand out of the corner of my eye and finally struck gold. I slammed on my brakes and went over to the vendor. A Nepali friend taught me the word for pumpkin — Farsi. It worked, and I left with a pumpkin about the size of my papaya. Even better, it only cost 200 NRS (1.77 USD).

But driving a scooter with a nearly perfectly spherical pumpkin between my feet isn’t all that easy. It started out well enough, but the moment I had to put a foot on the pavement to turn around, my pumpkin rolled out and down the street. Without thinking, I gave chase on my scooter like a motorized polo match.

I got a hand on the pumpkin, but almost went down in the gravel in the process. Once it was secure, it was a shaky drive through the Kathmandu traffic back to my apartment as I watched my pumpkin teeter precariously with every one of the many bumps in the road.

Making pumpkin bread from scratch turned out to be much easier than I thought. The only difficulty was making the puree from a whole pumpkin. To begin, you just hollow out the pumpkin like you’re making a jack-o-lantern (another experience I missed out on this year, so I had fun). Once you’ve gutted it, cut it into fourths and start taking small chunks of the actual flesh of the pumpkin until there’s just the rind left. Then you just boil the pumpkin chunks until they’re tender and mashable. I thought it was going to be the hardest part, but it was probably the easiest. So here’s something rare — pictures of me doing stuff. 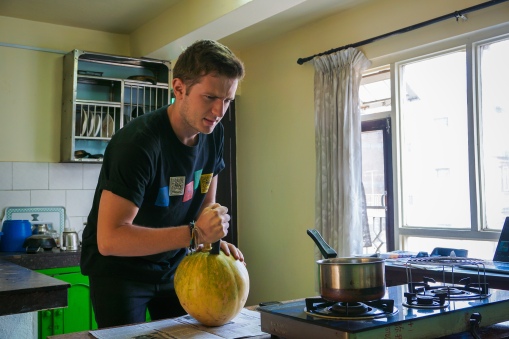 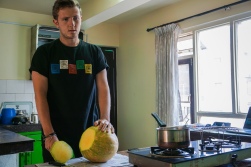 My main difficulty is that I don’t have a single measuring cup. So I had to do every measurement — cups, teaspoons, whatever — with my best guess. Two cups of pumpkin? Mashing a whole pumpkin oughta do it. Three and a half cups of flour? I’m pretty sure this teacup is close to a cup. After baking, the ratio was definitely tilted towards the pumpkin side.

It was also during the preparation that I realized I wasn’t using flour. It might’ve been flour, but it was made from something weird like chickpeas. I later added wheat flour to the puree, which might’ve helped some.

I sealed the puree into a blender (I wish I knew we had one before mashing a whole pumpkin by hand) and began another precarious scooter ride to my friend’s place. They were the one with the oven, so the puree had to be brought there.

We actually had assembled a really good collection of food. Someone brought homemade lasagna, the hosts made stuffing and green beans, another brought rice wine, and I had my questionable puree that wasn’t in the oven yet. I wasn’t optimistic about it.

Once we all sat on the floor around the table, the Americans present decided we should do what everyone does on Thanksgiving — say what we’re thankful for. I said I was thankful to be away from the US and out doing something I was excited about. Most of us said something similar. But as the night went on, I had a better revision of what I had originally said.

It’s not just that I’m away from the US. It’s that I’m away from the US and have managed to find a good community. I’ve never had to do that before. Normally, most people have to build their social circle from scratch in college. I was on the swim team in college, so I never had to do that. I knew that, even if I made no other friends, I’d always have my team. Of course I still pursued friendships outside my team, but I also never felt much urgency for it. So when I came to Nepal, I had a single connection I had made over Facebook. It was the first time I was starting in a new city from scratch. I was pretty anxious about it. I don’t get anxious about much, but I’ve always had anxiety about that. I felt it a little when I went to college, a lot when I went to study abroad, and much more when I left for Nepal. Will I make any friends? Well, I think I’ve managed to. So I’m not just thankful to be in Nepal; I’m thankful that I’m here with these people. 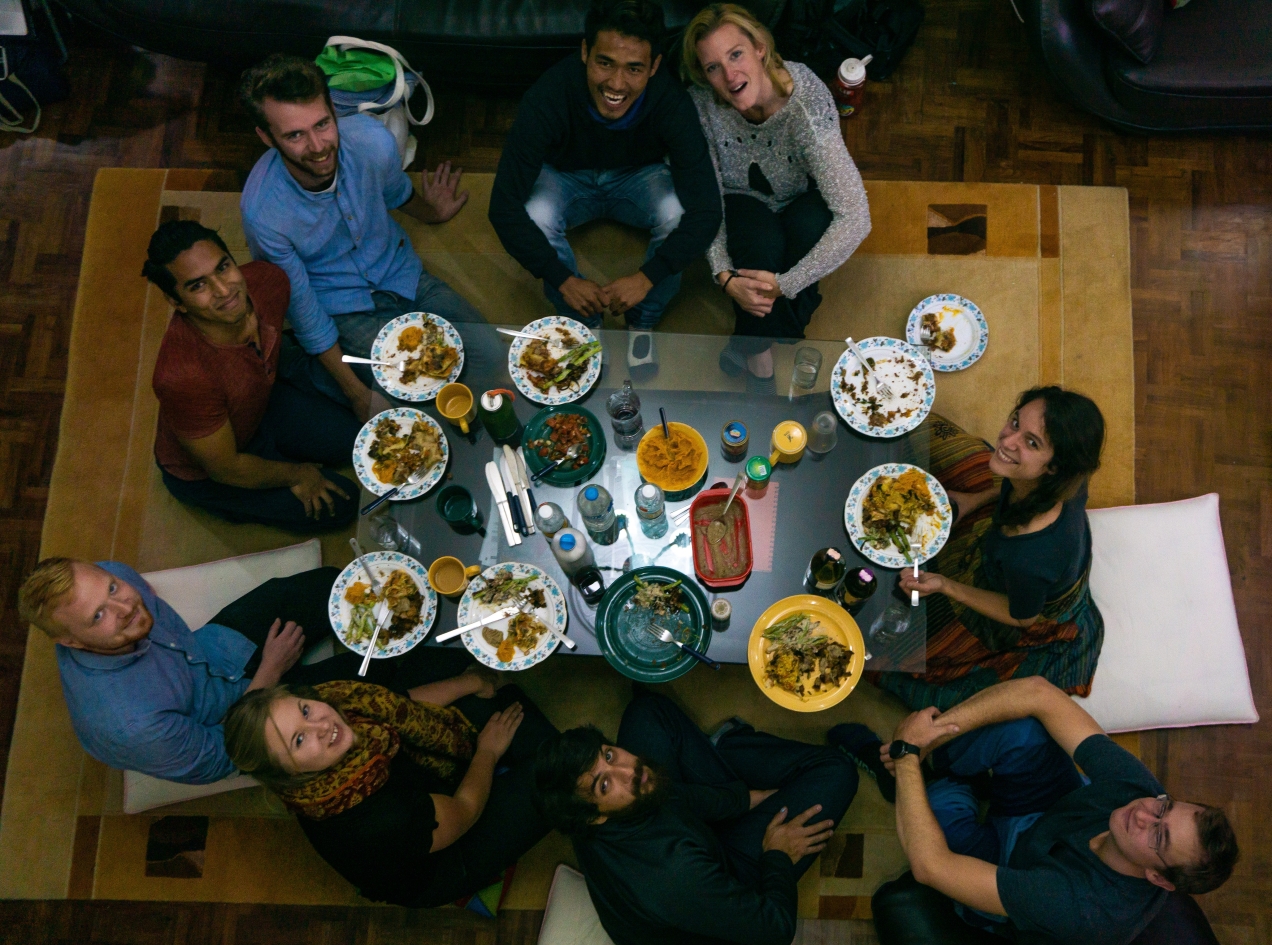 Thanksgiving is also a lot more interesting when you’re with people who had never experienced it. Our group had four Americans, two Australians, two Finns, and two Nepalis. It was good to sit down with people from four different continents and share something I’ve previously only shared with family.

My pumpkin bread also turned out to be the bomb.

2 thoughts on “Australian Thanksgiving + The Hunt for Pumpkins”